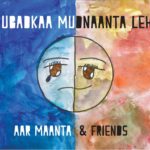 Ubadkaa Mudnaanta Leh (“Children Have Priority”) is a new bilingual Somali-English children’s album created by London-based Somali artist Aar Maanta and youth from Minneapolis, Minnesota’s Cedar Riverside neighborhood. The album flows between generations and genres, mixing traditional Somali music with hip-hop influenced beats, spoken word and poetry, Islamic greetings, educational children’s songs, and much more. Ubadkaa Mudnaanta Leh was produced by Greg Grease of astralblak, engineered by Medium Zach, and collaboratively written by Aar Maanta, Somali playwright, poet, educator and filmmaker Said Salah, and 20+ youth and teenagers from the Cedar Riverside neighborhood. Ubadkaa Mudnaanta Leh was funded by a 2018 Joyce Award from The Joyce Foundation, the only regional program dedicated to supporting artists of color in major Great Lakes cities with the goal of elevating their visibility and recognition in their craft.

For the album release at The Cedar on 3/22, Aar Maanta & Friends will be joined by storytellers from The Children’s Theatre Company and a fashion show curated by Sisterhood Boutique, creating a free, family friendly evening of entertainment that’s welcome to all.

6:00pm – Doors open. Food and snacks will be provided starting at 6pm.

Aar Maanta is a Somali musician whose activism, work and creativity led him to become a goodwill ambassador for the United Nations High Commissioner of Refugees (UNHCR), while leading one of the only active touring bands in the world that plays live Somali music. His work includes the recent UNHCR campaign about irregular youth migration in the Horn of Africa, Dangerous Crossings, for which his song “Tahriib” was reproduced and performed in collaboration with leading artists from Africa.

As a singer and songwriter, Aar Maanta has embraced an eclectic mix of styles including influences from rock and reggae jostling with traditional Arabic and Somali music. Despite graduating with a science degree, Aar Maanta pursued music. He began the Horn 2 Groove recording project which generated his 2009 debut album, Hiddo & Dhaqan. The album merged traditional Somali music with Western influences like house and reggae into a fusion described as Afro-hop. In 2010, the Paris-based radio station StarAfrica recognized Aar Maanta’s achievement in creating this new sound when it named him “A Somali Culture Shaper in London.” He released the 2014 EP, Somali Songs from the Diaspora to connect with Somalis around the world. Aar Maanta hopes to take his music to the wider community with the release of Ubadkaa Mudnaanta Leh and an additional album in the works to be released in fall 2019.