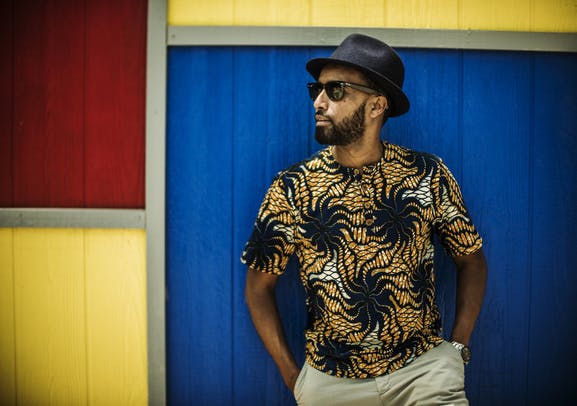 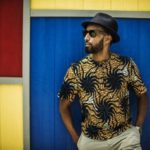 He’s a Somali singer living in London with a European fan base, so what’s Aar Maanta doing as a Minnesota artist-in-residence?

Walking from the Cedar Cultural Center to his favorite Cedar-Riverside eatery this past July — all of a block and a half away — Aar Maanta was stopped three different times by local residents wanting to say hello. He’s partly a rock star to them, but also now a familiar sight in the neighborhood.

“The community here is really receptive musically,” said the London-based singer, bragging on the Minneapolis music scene the way people around here talked in the 1980s. “They’re more open to new ideas than a lot of cities.”

Of course, the community Maanta referred to didn’t live in Minneapolis in the ’80s, but was still 8,000 miles away in Somalia and Ethiopia.

A Somalia native himself with a poetic writing style and softly dramatic voice, Maanta has gotten to know Minneapolis in recent years just as Minneapolis is getting to know its Somali population. At the center of all that getting-to-know-you initiation is the Cedar Cultural Center, which first brought Maanta to town to perform in 2012, then 2015.

This writer — who’s very used to being on the short side of an audience — was quite literally struck by fans’ response at that 2015 Cedar gig, where tall Somali women in jilbabs and scarves danced so excitedly that they nearly bowled me over like a mosh pit at a punk-rock show.

No wonder the Cedar and Augsburg University recruited Maanta to be a 2018 artist-in-residence. Already this year, he’s set up shop twice to teach performance and songwriting to schoolchildren and work on a kids-music album with local hip-hop guru Greg Grease, among many other duties.

Maanta returns to Minneapolis this week to kick off the renowned Global Roots Festival on Saturday in conjunction with the Cedar’s 30th anniversary. The venue has also lined up shows for him at Mankato’s Kato Ballroom on Sept. 22, and at St. Cloud’s Paramount Center for the Arts on Oct. 13.

A sign of the Cedar’s continued dedication to international music — and a reminder of another of Minnesota’s big immigration waves — Maanta is co-headlining Saturday’s Global Roots opener with Swedish folk group Hoven Droven.

“I knew nothing about them but really like them now,” Maanta said in July, when he was three weeks into another run of workshops. During his stay, he enjoyed his first July 4th fireworks and another diversion not common around London: hiking.

“You’re lucky to have so much beautiful nature here,” he said.

Maanta’s residency is part of the Cedar’s Midnimo program, named after the Somali word for “unity.” So it was cruelly ironic that the residency had to be canceled last year when his U.S. visa was not extended as planned, for reasons not really explained — but reasons that were all too clear, he believes.

“It’s just obvious it was because of my ethnicity and [Muslim] faith,” said Maanta.

Also recruited as a goodwill ambassador for the United Nations High Commissioner of Refugees last year — he visited refugee camps around the Horn of Africa — Maanta acknowledged that getting a visa to perform U.S. gigs “has always been complicated.” What’s new, he said, is “how it’s openly discriminatory.”
He and his London-based band, the Urban Nomads — which will once again bring their unique blend of jazz, funk, R&B and East African influences to Saturday’s Cedar show — originally went to the U.S. Consulate in London together for the visa extensions. The group includes members who are French, Scottish Napoleon, South African British, Italian and Somali in descent.

“It’s a reflection of London,” he proudly noted of the band. “We’re all musicians, we all have similar professional backgrounds, we’re all British citizens. We were all told everything would be fine.”

But then Maanta got a call saying the consulate would need to do further background checks. He’s the only one in the band who got the call. “I have nothing to hide, clean record,” he said.

Nonetheless, the process stalled. Numerous classes and performances around Minnesota had to be canceled as a result. A former program director for the Cedar, Fadumo Ibrahim, told the Star Tribune at the time, “This case is a concrete example of how travel restrictions and the travel ban limit artistic voices and freedom.”

Coincidentally or not, one of Maanta’s most high-profile songs from 2010, “Deeqa” — named after Somalia’s defunct airline — is about his experiences being interrogated by British customs officials nearly every time he travels internationally, re-enacted with frustrating detail in an accompanying music video.

“Almost every Somali living in diaspora tells me they had a similar experience,” he said. “I’m voicing this issue for my people.”

With his visa finally extended and his Cedar residency in full swing, Maanta is stressing the positives this year. Foremost among them, he said, is the chance to teach Somali-American students how to voice the issues important to them.

Look for his kids’ music album from the Midnimo program out next year. Maanta hopes to see some of the program’s students making their own records in the coming years.

“Most of the children we’re working with have never done any creative work, never had the chance to write songs and work with artists,” he said.

His local collaborator Grease said, “I think anytime a young person can see and build with someone that [is] successful on any level — and especially on a creative level — is life-changing. Aar is really good at bringing it out of people. I was always inspired by working with him, as were the youth.”

Maanta did not start singing in public or writing songs until after earning a science degree in London. And still, it was somewhat by fluke: While working for a music production company, he filled in for a singer who backed out of a gig last-minute. He sang songs by the government-sponsored national Somali band Waaberi and other Somali music classics — tunes he learned from an aunt who helped raise him and encouraged him to sing from a young age. “I was just going to do one song, but my friends said I did well.” he said “So I just kept doing it.”

Adopting the stage name of one of his songs, “Maanta” (“Today”), the young singer became a fixture during Somali Week festivities in London during the late-’00s. He and his band began trekking to other European countries with large Somali communities, including Norway and Denmark.

His first U.S. show was that 2012 gig at the Cedar, when he learned just how vast and vibrant Minneapolis’ Somali population is.

“Even though it’s relatively new, it’s very dynamic in terms of the businesses and organizations,” he said. “And I was very surprised to see how politically active it is, even compared to London.”

That includes involvement with the political scene around the Horn of Africa, where he returned with his recent U.N. work but otherwise has not visited often.

In fact, Maanta — who declined to give his age (late 30s) or his real name — did not want to discuss his time in Somalia during our interview. Asked about emigrating from the then-warring country around age 10, the singer hesitated. “It was a pretty common story, not a good one,” he said simply.

Once again, he hoped to stress the positive.